Most people have barely heard of baobabs, or boabs as they’re more commonly called in Australia. It’s odd, since we’re one of the few places in the world which has a native baobab species – the Australian Boab, Adansonia gregorii. 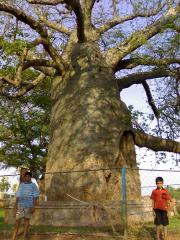 All baobabs are extremely drought tolerant and hardy. Some are as little as 3m tall, while others are up to 30m in height, but all have massive trunks which can reach 15m in diameter. The massive trunk may be cylindrical, bottle shaped, tapering, or irregular; thick tapering branches resembling a root-system extend from the trunk, which is why baobabs have often been referred to as upside-down trees. The wood is fibrous and soft, under a thick layer of bark, and stores water for dry periods. 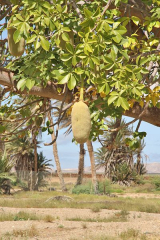 The wood can be chewed to provide moisture and relieve thirst; humans as well as certain animals eat it in times of drought. The roots can be tapped for water. The trunk of the tree often develops a hollow, which fills with water during the rainy season and acts as a reservoire during the dry season. Water inside the trunk of a baobab remains potable for months, apparently due to natural preservatives leached by the living wood that keep water from fouling. This may be an adaptation to prevent microbes breeding in the water and infecting the tree, which may have water in the trunk for several months or even years at a time.

Baobabs are semi-deciduous, and may lose their leaves and become dormant for several months of the year. This period depends on the environmental conditions in the area. Under good conditions, growth can be quite rapid, up to 2m in 2 years. Trees will begin producing flowers and fruit after 8 – 25 years, and some species may live for up to 1000 years. 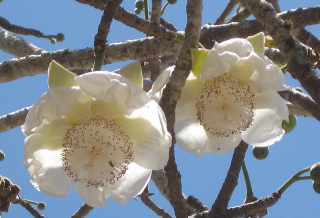 Flowers are large, showy, and highly scented. Although pollinated by fruit bats, the flowers are also a favorite nectar source for bees. The fruit consists of a hard, woody outer shell surrounding an arrangement of segments similar to those of a citrus fruit, with angular pockets of soft pulp surrounding a cluster of hard, black, kidney-shaped seeds. The pulp may be white, yellowish or pinkish in color, and is dry when ripe. It is rich in vitamin C, provitamin A, B complex vitamins (B1, B2, B6), calcium, phosphorus, and iron, and is described as having an acid gingerbread flavour. It forms a mealy solid, but a few hours in the sun dries it into an off-white powder. It can also be beaten into thin, leathery pancakes which can be stored for an extended period. This powdery substance is soaked in water to provide a refreshing drink somewhat reminiscent of lemonade, which is also used to treat fevers and other complaints. The seeds are also reported to be edible. 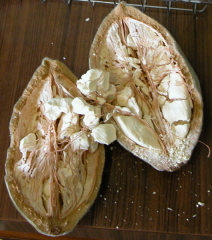 Each matured plant may produce 30 kg or more of fruit per year. Harvest the fruit when it falls to the ground, or pick ripe fruit if it can be reached. The fruits themselves are unusual in that they remain dangling during the dry season long after the tree sheds its leaves. They are also unusual in remaining edible far past the point where other fruits would have decayed into putrefaction. Stored under normal ambient conditions, they keep for up to 3 months.

Seeds can be collected from picked or fallen fruit. After crushing the hard woody shell of the fruit, the seeds can be extracted from the dry acidic pulp. Baobab seeds have very hard seed coats and germination is usually less than 20%. In nature, dormancy is broken by passage through the digestive system of large mammals. In cultivation, dormancy may be broken by immersing the seed in hot water for five minutes, by manually scarifying the seed coat, or by acid scarification for 6 – 12 hours. Unless pretreated, seeds can take a year to germinate. Seedlings have big, flat and paired cotyledons, and the first leaves are generally narrow, simple and linear. Effective protection against livestock is essential after planting the seedlings.

The leaves (of at least the African Baobab) may be eaten as a green vegetable, sometimes steamed and eaten as a side-dish like spinach, but most often ground up in soups, stews, sauces, relishes, and condiments. They contain high levels of provitamin A. The leaves may be dried, and keep well in this form, without losing their glutinous polysaccharides. To maintain a high level of provitamin A level in dried leaves, it is important not to dry the leaves in the sun. The sprout of a young tree can be eaten like asparagus, and the tap root of very young trees is also edible. 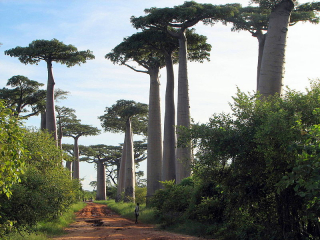 What baobabs have to offer: 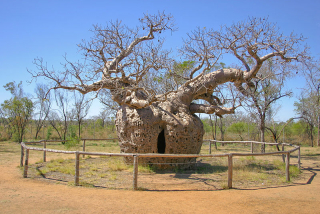