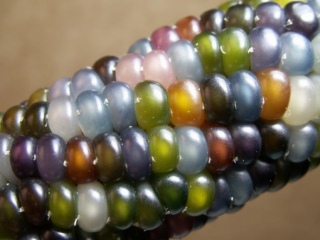 The internet – or at least the organic / heirloom gardening, plant-nerd and permaculturish back alleys of it that I frequent – have been buzzing for the last week or so about a newly discovered variety of corn.

It’s called glass gem corn, although it could as easily be called rainbow corn or even omgponies corn. Whatever the name, it’s beautiful. 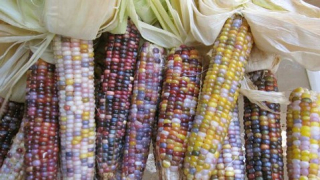 Glass gem is a flint corn variety, also sometimes called Indian corn (as opposed to dent, or field corn, sweetcorn, and popcorn) which means that it’s used for grinding into cornmeal or cornflour rather than as a fresh vegetable. It might work as popcorn, although it’s not specifically a popping variety. You could probably pick it when it’s still young, and roast it; most grinding corn can be used for roasting as well if you pick it at the right stage of development.

I really, really want to try growing some. Until this week I’d never considered growing a flint or dent corn variety and grinding my own cornmeal, but I’m now fired up to try it. I love tortillas and corn chips, and I’m quite happy to experiment with adding corn to stews and soups the way I’d normally add pearl barley or lentils. I’ve never had grits, but they sound a lot like the South African mealiemeal porridge that my dad used to love, or polenta. Entirely edible. 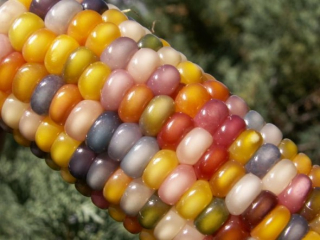 The only downside is that importing new corn varieties into Australia is quite tricky. Import permits, quarantine inspections, limits on how many seeds can be imported, and then organising those seeds to be grown at a quarantine facility in Australia before quarantine release the resulting plants. I’m not clear on if they even do release the plants, or if they release the seeds of those plants after growing them on for their entire life cycle in a quarantine facility. I’m going to see if I can convince one of the heirloom vegetable seed companies to import some seeds (to grow for more seed, which they can sell next season). Failing that, I’ll have to import some myself.