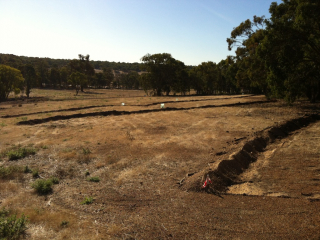 There are a million or more places to start any story – and a garden (or a forest) is just a story which is planted rather than told – but you have to pick one. So while I could start with the search for a location, or with the process of falling in love with this block of land and choosing it and buying it, or with the first trees we planted, I am instead going to start with the swales.

Swales are a logical place to start. For those who don’t grok the concept, a “swale” in this context means a level ditch on contour. They form part of the permanent bone structure of the design, along with any other earthworks. Council regulations don’t allow us to have a dam, so the swales are really the only major earthworks we’ll be doing aside from levelling the building site when we build our house. 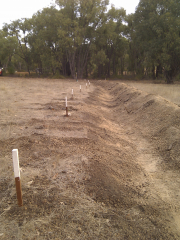 According to my research, for the rainfall we’ll be expecting (600 – 700 mm pa average), the swales should be about 12 m apart. As a general rule, swales should be 1 – 1.5m wide at the top (the width at the base is less due to the sloping sides of the swale), 40 – 50 cm deep, and long enough to hold the maximum runoff for a 24 hour period for your catchment area.

Gallifrey is on a sloping site, and along the Western side of the property there are a lot of big chunks of soft stone just under the surface of the laterite gravel and sand that passes for soil in those sections. It’s just too rocky to dig regular swales, even with a rockbreaker. The stone is too soft for the rockbreaker to do more than dig a small hole in the surface, but too hard to dig through. So, we’re going to have two types of swales – the regular sort, dug on contour to about 1m wide and 40cm deep, with a mound on the downhill side, and “Polish” swales. Polish swales are a variation for ground which is too rocky to dig regular swales, based on the gambions which are often used to stop gully formation.

Instead of being dug into the soil, a Polish swale is built up on top of it along the contour lines with small branches, compost, discarded greenery, stones, and other debris. This forms berms that trap soil, leaf litter, bird poo, and anything else sluicing down the slopes. The berms of these inverted swales slow down water and force it to percolate down into the root zone of the garden or food forest. I got the name from ‘Gaia’s Garden: A Guide to Home-Scale Permaculture’, by Toby Hemenway, but I’ve been thinking about similar ideas since I read about hugelkultur. Our Polish swales are going to be built up using dead wood, rocks, gravel, and whatever other appropriate materials we can find. It should work. We haven’t tried it yet, but we will.

Our first experiment with swales involved hiring a dingo for a day to try digging them ourselves. It worked brilliantly, and (who knew?) dingoes are a lot of fun to drive. We tidied the swales up afterwards with a shovel, since our dingo driving skills weren’t quite up to digging a level ditch, but even so. Then we planted the swale mounds by hand with broad beans and lentils, hoping for rain to sprout them and give us some winter groundcover. 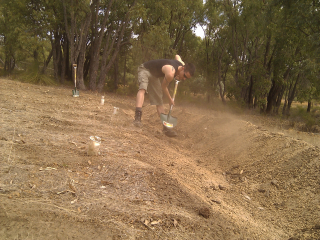