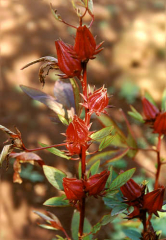 Roselle, better known in Australia as Rosella (like the parrot, but less feathery) is an annual (or sometimes biennual), fast growing shrub in the hibiscus family. Like most hibiscus and mallows, it has edible leaves and flower petals, but Roselle is most famous for its edible calyx.  The calyx, stems and leaves are acid and closely resemble the cranberry (Vaccinium spp.) in flavor. The calyx is used to make jams and sauces, and dried for tea. The tender young leaves may be cooked and eaten as a substitute for spinach, though somewhat spicier in flavour.

Young roselle shoots, leaves and calices are traditionally used as a cooked vegetable or finely cut and used in sauces in Africa. The leaves and fresh green calices are used to make a soup, which is rather mucilaginous in texture. Fibre from the stems may be used as a substitute for jute (fibres produced from the stem of Corchorus species). 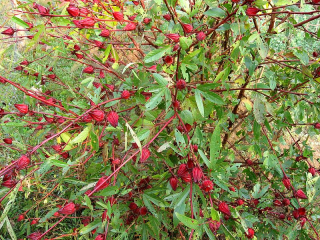 Roselle grows into a small shrub, up to 2.5m tall, with smooth or nearly smooth, cylindrical, typically red stems. The leaves are generally lobed, with 3 – 5 points, and have distinctive reddish veins. The flowers are white to pale yellow with a dark red spot at the base of each petal, and turn pink as they wither at the end of the day. They are usually self-pollinating. The flowers have a stout, fleshy calyx, usually bright red, at the base, 1–2 cm wide. This becomes more prominant, crisp, and juicy after the flower has withered and while the fruit matures. This enlarged calyx fully encloses the seed pod, which is 1 – 2 cm long and green when immature. The mature seed pod is light brown, with 5 valves or segments, each of which contain 3 – 5 kidney-shaped, light-brown seeds. 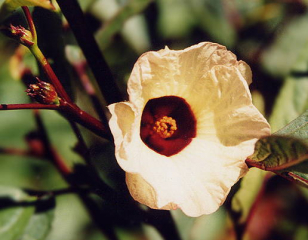 Roselle grows easily from seed. The seedlings grow quickly, reaching about 30cm in height after 1 month. The plants goes through a 2 – 6 month vegetative growth phase before flowering begins. Leaf harvesting can begin 6 – 8 weeks after the seedlings emerge, and stimulates branching and leaf production.  Seedlings may be raised in nursery beds and transplanted when 7-10 cm tall, but seeds are usually set directly in the field, 4 to 6 to a hill, the hills 1-2 m apart in rows 1.5-3 m apart. Roselle is often intercropped with other crops such as pearl millet, sorghum, groundnut, sweet potato, yam or cowpea. Roselle is susceptible to most diseases affecting cotton, and root and stem rot caused by several Phytophthora spp. lead to plant losses.

Plants reach maximum productivity in their first growing season, but can be pruned to achieve an early, although less substantial, harvest in their second year in subtropical climates. The fleshy pods are best removed when they can be picked easily from the bush by hand while they are still young and crisp; as the seedpods mature the calyx becomes tough and stringy. Once picked, the next task is to remove the calyx, the fleshy petals, from the seeds. It is a little time consuming, but they peel off quite easily. Use gloves because they seeds are prickly. The green seed pods are high in pectin, and can be used to assist in jam making.

Roselle Tea
The tea is very similar in flavour to rosehips and high in Vitamin C. To make it, strip off the red calyx and dry it in the solar dryer or a slow oven until leathery. Only two small pieces are needed per cup of hot water. Try mixing it with dried lemongrass, lemon verbena and dried organic orange peel, or with ginger or mint for a wonderful herb tea. It is also good as an iced tea. 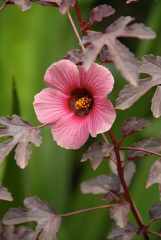 What roselle has to offer: 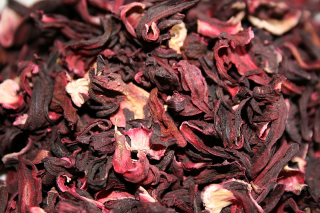