All the slackness, it has been ours. Or we have been in it, or something. Which is to say, it has been many many many lots of days without an update.

So. We bought and erected a small storage shed to keep tools in. Also, spare furniture and house-things, since moving two people into one house (as we did in Jan last year) means combining two people’s worth of stuff into less space. I mean, we have 3 beds between the two of us, and loads of kitchen things and linen. I don’t want to do a purge until we have space to unpack it all and choose together what to keep and what to recycle, and that means waiting until we have our house at least partially built. 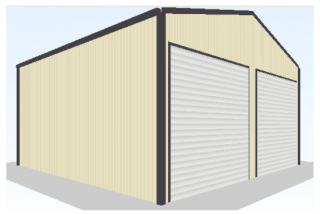 We also bought the garage, which will in the short term be for storage rather than specifically for parking in. The idea is that once we have that we can start haunting salvage yards for doors and windows and tiles and other interesting bits and pieces. Also, it means we’ll have somewhere dry to keep the straw bales when we get them. I did mention that we’re building a straw bale house, did I not?

The plans for said straw bale house are almost ready to send to the council for planning approval. We’ve finessed and polished and tweaked, and talked to a couple’ve architect friends who are very kindly lending their expertise to advise us. They’ve actually had a huge impact on the design, and improved it a lot. No real surprise there, it is what they do for a living. We’ve also built a full 3D model of the house using Google Sketchup, to check things like if the window placement works, and if the verandah overhang is the right depth to let winter sunlight in but keep the summer sun out. It is. I’m incredibly excited about starting to build this baby, although we will still need to get approval from the bank for money to do it. Unfortunately, houses are expensive.

The garage was meant to go up last weekend in a miniature barn-raising. But Murphy’s law struck, and the courier company delivering the bolts and screws – delivered as a separate package from the main garage components – couldn’t find our address. They declared the package undeliverable and sent it back to NSW. We got a call from the company who sold us the shed on Friday last week to tell us that they’d just received the bolts package back. It’s supposedly being express couriered back to arrive today, so we can put the garage up this weekend. As well as going to the Perth Earthdance festival and the Hulbert St Sustainability Fiesta.

Last weekend, since we weren’t able to put the garage up, we planted trees. A lime tree, bought on a whim, is now planted in between the icecream bean saplings to start our little subtropical microclimate zone, and the first two olive trees of the eventual olive grove are in as well. We planted a Kalamata and a Manzanillo, both of which produce good table olives and acceptable oil. The grove will be six trees in total, possibly a few more, planted in a rough circle. It’s inspired by some hundred year old olive trees I saw in a tiony park in Lima several year ago. They were so gnarled and beautiful, like fairy tale trees, that ever since I’ve wanted my own olive grove. 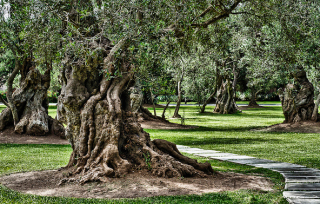