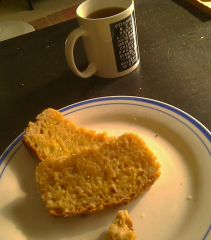 Just over a week ago, I went to a workshop on fermented foods at Perth City Farm, run by the awesome Bonnie Wykman (of PeaceTree Permaculture). The workshop was a great overview of fermented and cultured foods, from yoghurt and kefir through to sourdough, ginger beer, and mead, as well as the history and some of the health benefits of eating active (probiotic, i.e. containing live microorganisms) cultured foods.

Bonnie also gave us all samples of her sourdough starter, kefir culture, and water kefir culture. And then a friend of mine gave me some of her kefir grains as well, so I have two different strains which I’ve merged. For science!

I’ve been thinking about trying some lactofermentation for ages, but getting the starter cultures meant trying it now – and led to a massive bout of making and eating fermented probiotic foods. Since the workshop, I’ve made all the things. Kai & I have even (as of last night) started experimenting with lactofermented pickled vegetables. So in about 3 weeks we’ll be able to try them and see if it worked, and if adding a few olive leaves has the same keeping things crunchy effect as grape leaves apparently have. Watch this space. 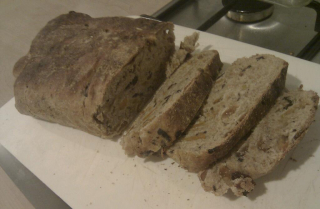 My sourdough starter is doing amazingly well. I started off feeding it organic spelt flour, because that’s the only organic flour I could find at short notice, and it seemed to like that. I now have some organic rye flour (rye is recommended, because apparently it ferments more easily than wheat or spelt), and that’s even better. It’s like having a pet, except instead of playing with it or petting it I use it to make bread. So far I’ve made Bonnie’s quick & easy ‘crumpet loaf ‘, and a basic sourdough fruit loaf from the Bourke St Bakery recipe book (which was amazing), and now – as in it’s in the oven right now, and smells delicious – a straight sourdough loaf from the same book.

My first attempt at kefir smelled a bit funny when I strained the kefir grains out. Not bad, just not the way I thought it should smell.. so I dutifully put the grains in fresh milk, and then left the kefir to continue to burble to itself for a few days. And as a result I ended up with over-fermented super sour kefir which is inedible (for me) but seems to make excellent hair conditioner. (Thank you, Natalia, for that idea) 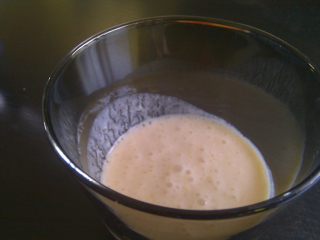 Batch number 2 worked much better. I left it in the fridge during the day, but on the counter at night when “room temperature” was cooler. I now have some very drinkable kefir (functionally equivalent to drinking yoghurt) in the fridge; half of it has some apple syrup and cinnamon added, and the other half has some cooked up strawberries & nectarines added, and both are delicious. I’ve also got some kefir grains in some cream to make cultured sour cream, most of which will then become cultured butter to take with to the family meal events at Xmas.

I also tried eating a kefir grain. Weird. Chewy, like a gummy sweet, but not sweet at all. Quite nice, in that I’m not sure what just happened kind of way. The water kefir grains are much less odd to eat, just mildly sweet and bland with the texture of a strong jelly. Not chewy or sticky, just .. there.

Water kefir appears to be the easiest thing in the world to make. Dissolve some sugar in some water, add a little piece of clean egg shell or a pinch of bicarbonate of soda, and stir in the water kefir grains. Then leave it for 1 – 3 days, strain out the water kefir grains, and add something tasty and seal it for another 2 days or more for a second fermentation. Adding ginger to the first fermentation seems to make the water kefir grains very happy; they multiplied almost twice as much as the grains in an identical bottle without the ginger.

I’m hooked. This is awesome. And since I can’t have a dog or a cat or chickens yet (we’re still renting until our house is built, and rental agents are pretty much universally anti-pet), these microbes (and the worm farm and the houseplants) are the next best thing.

(water kefir image source: Wikipedia, author Simon A. Eugster; all other images are my own)