There are a multitude of tomato varieties, ranging from black and purple through every shade of red, pink, orange and yellow to the ones which are green when ripe. Most of them taste better than the standard supermarket tomato varieties available in Australia. Diggers Seeds holds annual taste tests of a selection of varieties, and the supermarket variety they scored for comparison got only 42.46% approval, while the heritage varieties ranged from 60% to 77%.

Not all good tomato varieties are heirloom or heritage varieties, though. There are still plant breeders out there working on annual vegetables like the tomato, creating new varieties that breed true (as opposed to the F1 hybrids, which do not). The Modern Farmer magazine has an article on a new tomato variety called Lucky Tiger, bred by Fred Hempel of Baia Nicchia Farm in Sunol, California. It looks beautiful, although since it’s in the US and I’m in Australia I haven’t had a chance to try it. As with TV and movies, we have to wait a long time to get seeds to new plant varieties, when we get them at all.

Mr Hempel hasn’t said what the full parentage is of his Lucky Tiger, but he said that one of the direct parents is Blush. Blush, released in 2011 (and available from Seeds of Change and from Artisan Seeds), is an open pollinated tomato variety, selected by Mr Hempel from an original cross between Maglia Rosa (selected by Mt Hempel, released in 2007) and an un-released variety called Zucchero. I have none of these varieties available to replicate the process that created Lucky Tiger, unfortunately. 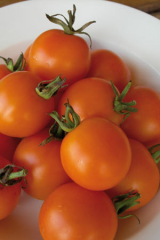 However, there are many heirloom varieties that I do have access to. Jaune Flamme (aka Jaune Flammee) was declared the equal first winner of the 2013 tomato taste tests held at the Adelaide Botanic Gardens. It’s an indeterminate, heavy yielding old French variety with beautiful persimmon orange skin, a blushed yellow/red interior, and (apparently) a full-bodied, citrus-like flavour. Ananas Noir and Green Zebra also scored highly, and Green Zebra has those beautiful stripes. 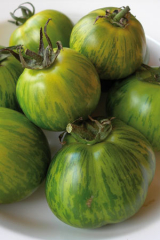 I know I get overly excited about plant and animal breeding projects, but tomatoes wouldn’t be too tricky. Perth has almost the ideal climate for them – lots of sun, hot summers and mild winters, little chance of mildew. So, amongst my many (many, many, possibly too many) projects, I think I might try some tomato breeding. Jaune Flamme x Green Zebra to begin with, and then perhaps one of the elongated types – maybe Speckled Roman, or Cherry Roma. And in the mean while, I might see if I can get a few different varieties from the farmers market this weekend, and try growing the seeds from the tastiest ones.

I might also look up tomato genetics and see what I’m dealing with.

All images from Diggers Seeds, except the Lucky Tiger image which is from Modern Farmer.