Moringa (Moringa oleifera), also known as drumstick tree or horseradish tree, is a pretty, graceful tree which produces edible seed pods (eat them when they’re green and tender, after cooking like snow peas) and edible leaves and flowers (eat raw or cooked as a green vegetable). There’s a tree growing over the fence of a back yard near my old house in North Perth, and I can confirm that both the flowers and leaves are very good raw, with a slightly nutty, broccoli flavour and a hint of mustard-like spiciness. They’re also very moreish. I’ve tried them in a quiche, but not on their own when cooked, but I feel pretty confident.

According to the USDA analysis, Moringa leaves contain about 9% protein, and around 8% carbohydrates. In addition, based on the US recommendations for adults, 100g of Moringa leaves supplies a significant percentage of the average daily nutritional requirements for a person: 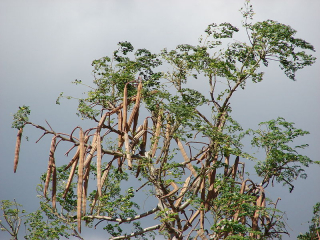 The name ‘horseradish tree’ comes from the fact that the roots, which apparently taste like horseradish. There are contraindications to eating the roots though, as they contain low levels of neurotoxic compounds. The flowers and immature (green) seeds and seed pods can also be eaten, although the seeds and flowers may contain low levels of the same toxins as the bark and roots. The immature seed pods (“drumsticks”) are traditionally cooked and eaten like green beans, and are a common ingredient in a number of South-East Asian curries and stews. The seeds can be pressed to produce a light cooking oil, which can also be used to lubricate machinery. Suspension of the ground seeds can be used as a primary coagulant to clarify turbid water.

Moringa trees can reach up to 10-12 m in hieght. They have a spreading open crown, typically umbrella-shaped, and deep roots. The bark is corky and grey. The branches are brittle and fragile, and the foliage is feathery. White to cream, sweet-smelling flowers are produced throughout the year, on inflorescences 10 – 20 cm long. The seed pods are green when young and turn brown on maturity. The mature pod splits open to expose 15-20 rounded, oily seeds, 1-1.5 cm in diameter surrounded by 3 papery wings, up to 2.5 cm long.

Under good conditions, moringa trees are very fast-growing, as much as 3m in a year. They can be coppiced for the production of foliage, and the foliage can also be used as fodder for animals. This is a tree that we will be planting several of, all through the food forest.

What moringa has to offer: 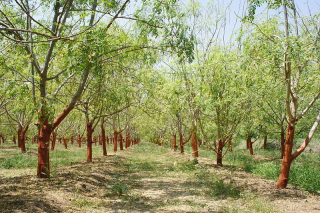