One of the ideas about permaculture which resonates with me quite strongly is that everything you need is available to you, you just need to learn to take advantage of the resources you have. This isn’t the radical self-reliance ideal which has been so problematic for many people suffering various forms of disadvantage, from mental health problems to fiscal difficulties; this is the idea that you make your own luck by paying attention and taking opportunities when they present themselves. I really like that.

The latest illustration of this idea is embodied in some free mulch. A lady I work with was talking to my project manager about plants and she advised him to mulch his garden to save water & improve the soil – and then she asked if he wanted some mulch. Turns out she’d just had a tree taken out and had the guy mulch it and leave the mulch, but it’s far more mulch than she needs. I figured she’d probably be happy to have the same conversation with anyone, so jumped in and I said that if she had excess mulch, I’d be happy to take some. She said she’d love that because she really wants it gone, and none of her friends or family are interested. So we went and picked up a trailer load of high quality organic wood chip mulch to spread over my in-progress herb garden. 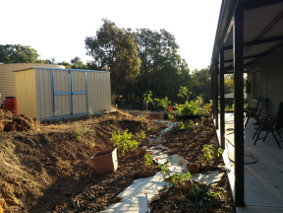 It makes me deeply happy to do things like that, create situations where everyone benefits that way.

My friend Charlie Mcgee created an album of permaculture songs, and one of them is about that very idea. I sing along with it (and the other songs on the album) in the car, and now every time something like this happens I get the lyrics quietly playing in my head: “Everything you need is right in front of you; when you learn to see, good things come to you.”

The whole album is awesome, by the way. You should listen to it.