We didn’t do any of the traditional things on the Australia Day public holiday yesterday. No fireworks, no picnic, no BBQ, no beach trip. Instead we bought some new baby chickens, and almost burned the house down.

Turns out, when the dough in the bread machine overflows, it ends up directly on the element. Which is fine, unless the element is on, to cook the bread. At that point, you get charcoal inside the bread machine. We did not in fact start a fire, but it was unhappily close – and it took all afternoon to air the smoke out of the house. 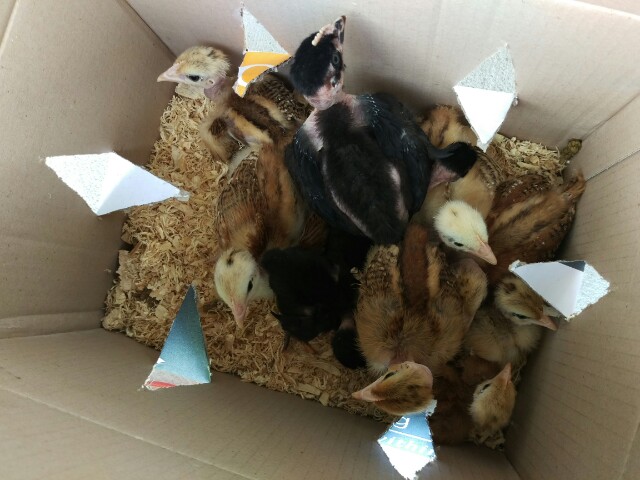 The fun part of the day, though, was buying chickens. Our existing flock are getting towards the age when they slow down on laying, so we need some new pullets. And I’d like to hatch some eggs as well, so we need at least one good rooster. Day olds are the most economical way to do that sort of flock enlargement, so we headed down to Comps Poultry and chose a bunch of adorable fluffy chicks.

They’re safely moved into the chick-raising pen, which is now on the verandah rather than in the garage. That way they get more airflow (but are still protected from draughts) and are close to where we are so they see us all the time and get used to humans, and we don’t get a garage which smells of enclosed baby birds and the associated poo.

I haven’t named them yet. I can’t tell most of them apart yet, and I don’t know which ones we’ll keep – we’re aiming for 6 hens and maybe 2 roosters (for breeding), so at least 2 are likely to end up as dinner. More if we end up with more roosters than we need. But for the moment.. we have ten new, tiny, adorable, peeping cheeping chirping babies just outside the bedroom window.