Not all of my interests are plant or animal related, although you might be hard pressed to know that from the things I post on here. It occurred to me this morning that other permaculture-ish and farm-minded people might well share some of my other interests.

One of those is recycling. Not ‘put it in the recycling bin’ recycling, but actually repurposing or reusing objects and materials. For example, I’m currently collecting soft drink cans, because this winter we plan to build an aluminium smelter so I can make aluminium sculptures (this sort of thing) and timber-and-aluminium furniture (similar to this). I have crates and crates of glass bottles with which to build some bottle walls – that project is on hold until the last water tank is in, because the place I want to put a bottle wall is where the trucks will have to drive through to place the tank.

I used to do quite a lot of sewing as a teenager, but as I got more time poor, it’s trailed off somewhat. But sewing is a brilliant way to re-use resources. For example, today I’m testing out a pattern for a little princess-line tunic dress, in 3rd-hand denim. I tend to buy jeans form the thrift store anyway, because (a) I have trouble finding new jeans which fit properly, and (b) new jeans are hideously expensive for a pair of casual/work pants, and (c) I quite like shopping in thrift stores. The downside is that pre-worn jeans do develop holes sooner than new ones, leaving me with a fair amount of heavy duty fabric which is no longer a functional pair of pants. I guess it is cotton, and it will biodegrade, but I feel bad throwing these things away. So – re-use the usable bits as something new. Also, denim dresses are cool.

The other innovation I’m testing out today is a thing called glue basting. For those who sew, you’ll already know about the tedium of pinning and basting (temporarily stitching) pattern pieces together before doing the final seams. This is the part of sewing that I always despaired of. It’s tedious, fiddly, inevitably ends up with being poked multiple times by pins, and my hand-sewing is pretty awful. So – if I can use washable glue instead, that would be pretty neat. 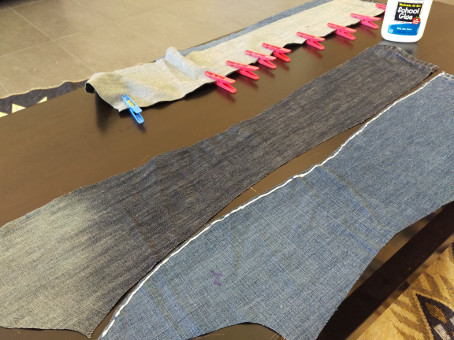