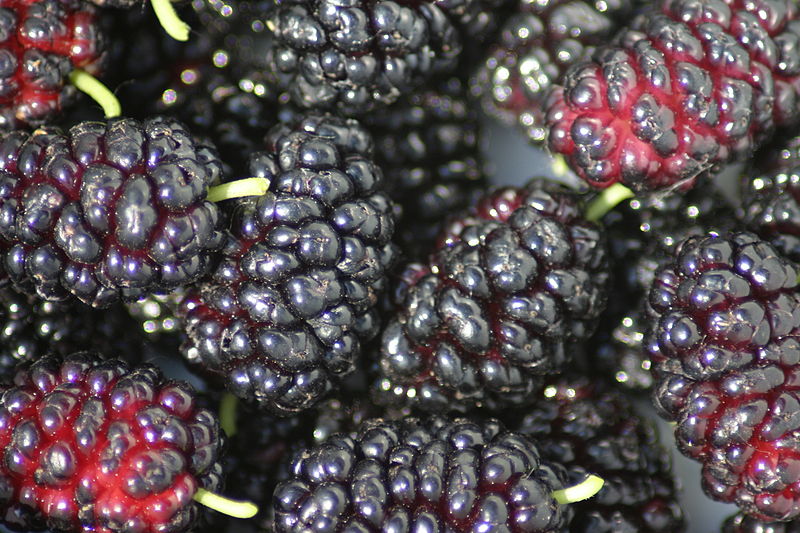 Mulberries (Morus spp.) thrive in Perth, and they are (in my opinion) one of the most under-utilised trees which grow well here. Not only are their fruit edible, both to humans and to most domestic animals (all poultry and most domesticated herbivores and omnivores, plus not toxic to carnivores such as dogs or cats), their leaves can be used to feed herbivorous livestock (rabbits, goats, sheep, cows, etc.) as a replacement for hay – i.e. as almost the entire diet of the animal if necessary. The leaves are also used in the silk industry, as fodder for domesticated silkworms.

There are three common types of edible mulberry – black (Morus nigra), red (Morus rubra), and white (Morus alba) – although there are 10 – 16 different species in total (or possibly more, depending on your references). Mulberry trees are fast growing when young, and relatively tolerant of shade and of damp conditions. Mulberry trees are either dioecious or monoecious, and sometimes will change from one sex to another. The color of the fruit does not identify the mulberry species – white mulberries can produce white, lavender, red, or purple fruit.

The black mulberry is the most commonly planted and most widely known in Australia. It is a medium sized decisuous tree, growing up to 12m tall and 15m across. The leaves are a rich, dark green, 10 – 20 cm long by 5 – 10 cm wide. The fruit, a berry-like cluster of small drupes, is a dark purple (almost black) when ripe. The juice of ripe mulberries will stain skin, clothing, concrete, and most other surfaces, and can be used to dye fabric (producing a pink toned grey-lavender colour). Unripe fruit is greenish-white; crushed unripe fruit can remove mulberry stains from skin or clothing if applied whent he mulberry stain is fresh. Black mulberries are thought to originate from Persia and Mesopotamia, though they are widespread throughout Europe, Asia, and the Middle East.

Red mulberries originate from North America, but are otherwise quite similar to black mulberries. The tree grows 10 – 15m tall, occasionally to 20m, and the leaves are rough to the touch, unlike the leaves of the black and white mulberries. The ripe fruit is red or purple in colour, and will stain.

The white mulberry is named for the colour of its buds rather than that of its fruit, which can be white or pale pink, lavender, red, or purple in colour. Dark coloured fruit will stain just like the fruit of red or black mulberries. White mulberry fruit is sweeter than the fruit of other mulberries, but often lacks tartness and is somewhat bland. The leaves are larger than those of the black mulbery, 5 – 20 cm in length, and shiny or glossy in appearance. The tree is native to northern China, and has been cultivated for centuries for its leaves, which are fed to silkworms.

One other type of mulberry is available in Australia – the shahtoot or king white mulberry (Morus macroura), also known as the Himalayan mulberry. Native to Tibet and other areas of the Himalayas, this is a medium sized, long lived tree. The fruit is larger than that of any other mulberry, sometimes as long as 10 cm per berry. Depending on the variety, the fruit is described as sweet but bland, or honey-like and equal to the black mulberry in flavour. The white shahtoot mulberry has genuinely white or pale pink coloured fruit which will not stain, while the red shahtoot has red berries which will stain. The fruit dry well and dehydrated mulberries are great as a sweet snack.

What mulberry has to offer: