Many people know carob only as a chocolate substitute, but the truth is that carob does not taste like chocolate. The raw, dry pods have a rich, caramel flavour a little like a date; roasting the carob pods gives them a darker, nuttier character. Both raw and roasted, carob pods have been used as a sweetener and basic foodstuff for thousands of years.

The cultivation of the carob tree (Ceratonia siliqua) is mentioned in ancient texts, dating back to Mesopotamia and Ancient Egypt. It was grown in the Middle East, North Africa and the Mediterranean. Carob thrives in these climates, surviving drought, heat, and poor soils. To fruit, a carob tree requires 500 mm of rainfall per year, although the tree can survive on much less once established. Carob is also frost tolerant (to approximately -20 degrees C). They can be grown form seed, or known varieties can be grafted onto seedling rootstock. Fresh seeds germinate quickly and may be sown directly in the field. Dried, hard seeds need to be scarified or chipped and then soaked in water or dilute sulfuric or hydrochloric acid solutions until they swell. Grafting (budding) is done when the stem is at least 1 cm in diameter. 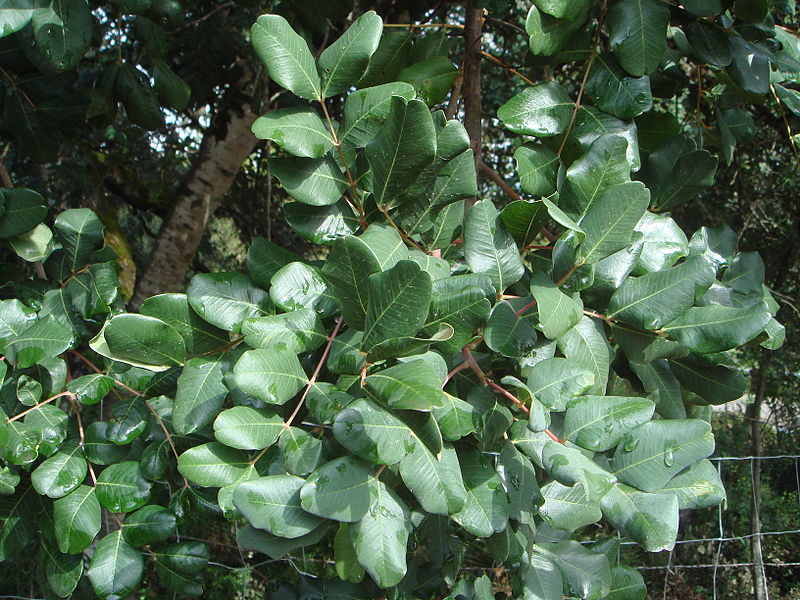 Carob trees are evergreen, with rough, brown bark and glossy, leathery green leaves. The tree may grow to be 15 – 17 m tall, but is slow growing. The flowers are small and red, borne in clusters along the branches and are pollinated by wind or by insects; male, female, or hermaphrodite flowers occur on separate trees. The fruit (seed pods) take a full year to develop and ripen. When green the pods are moist and very astringent, while the ripe pods are sweet when chewed. Male trees do not produce fruit. 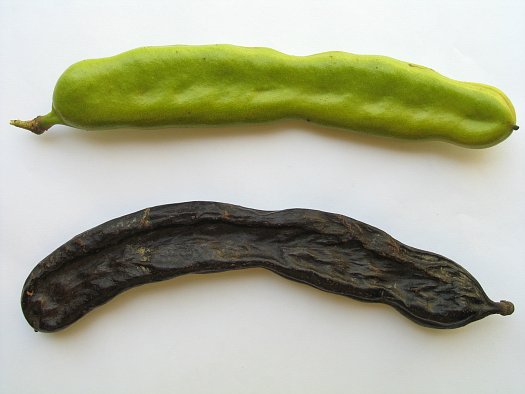 Carob pods contain approximately 45 – 55% sugars and around 8% protein, as well as high levels of dietary fibre. In addition, carob contains useful levels of niacin, calcium, and vitamins A, B1, and B2. Unlike chocolate or cacao, to which it is often compared, carob does not contain caffeine – meaning that it can be used in food or drinks for people who have allergies to or high susceptibility to caffeine. There is some indication that carob is helpful in calming digestive upsets, and it may be of benefit to people suffering from Irritable Bowel Syndrome.

Once we get past the idea that carob is a chocolate replacement, it’s easy to appreciate the flavours of carob for its own sake. Stir carob powder into porridge or sprinkle it over ice-cream. Chew on the whole pods or carob ‘kibble’ (piece of pods, after the seeds have been removed) as a snack when hiking or camping. Use it like cinnamon & sugar to dust over fruit such as quinces or apples before baking. Add it into cakes or muffins at a rate of about 1 – 2 Tablespoons per cup of flour to give a caramel-fudge flavour (you may need to slightly reduce the sugar used in the recipe, as carob is quite sweet). Add carob syrup to cocktails and mocktails for a sophisticated drink, or include it in salad dressings in place of honey or pomegranate molasses for a different flavour.

Carob is not exactly a staple food, in that it could not easily take the place of wheat, rice or corn as a main source of carbohydrates in the human diet. However, it has the potential to add to our dietary diversity and to provide both pleasant flavours and a source of sugars. It is also of use as high quality animal feed for ruminants.

This hot drink is perfect for a winter evening, combining the caramel flavour of fresh carob with vanilla and spices. You can make it with non-dairy milk if you prefer – I’d suggest hazelnut milk or rice milk rather than soy or almond milk, as the flavours will combine better.

a pinch of ground cinnamon or nutmeg

a pinch of ground ginger

1 Tablespoon honey, or to taste