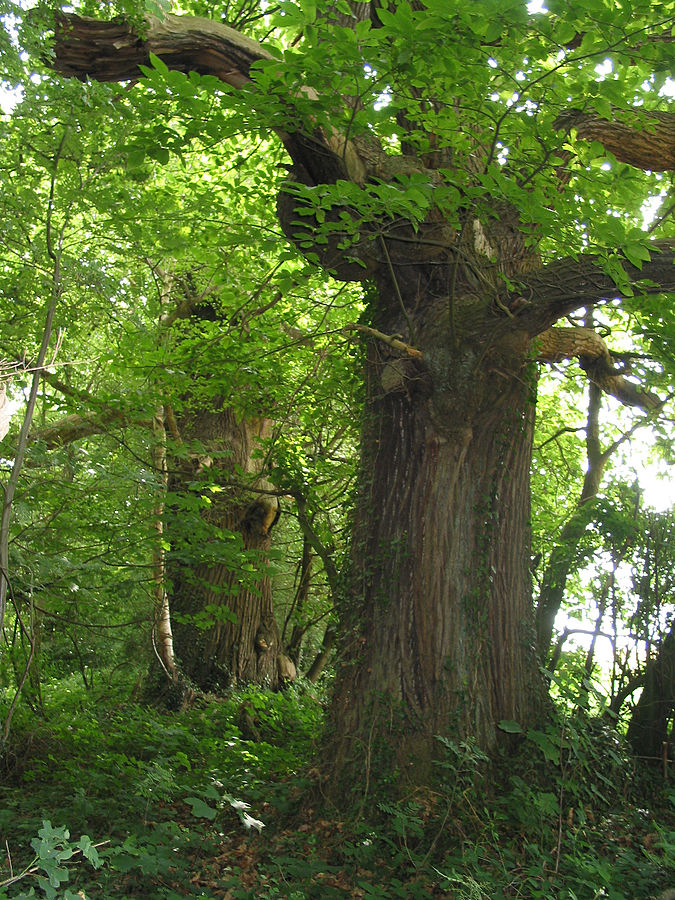 The chestnut tree (Castanea sativa) is, like the oak tree, typical of parks and woodlands in the UK – although they’re much more widespread than just that. They are still grown commercially in manmy places, with the top producers being China, Turkey, southern Europe, Korea, Bolivia; Australia is a small player in the global market, but we do grow chestnuts here too, mainly for domestic use. Chestnuts are a significant food crop in southern Europe and east Asia, and were widely eaten in the past by the indigenous peoples of North America.

The relationship between humans and chestnuts dates back to prehistoric times, like many tree crops which contain enough starch or protein to qualify as (potential) staple crops. Chestnuts are high in carbohydrates, and once cooked their texture and flavour (nutty, sweet) very similar to baked sweet potato. They can be eaten whole, pureed for use in soups and sauces, or dried and ground into chestnut meal for use in baking and cooking. Chestnut meal can be used in cakes and pancakes, biscuits, pasta, polenta, and as a thickener in soups and stews. The whole nuts can be used in soups, stews and casseroles in place of pumpkin or potato, or used to stuff vegetables, poultry, or fish, as well as having a wide variety of uses in baking. The nuts are also candied and sold as marrons glacés. 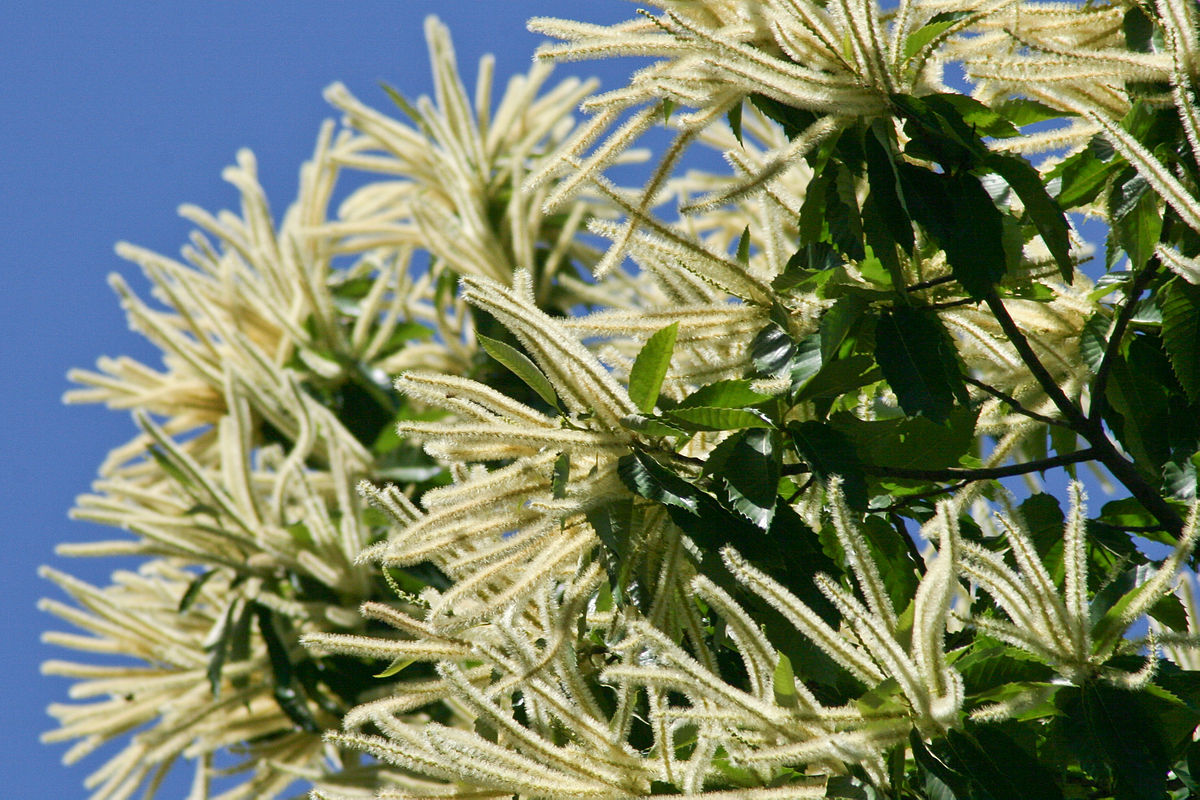 Chestnut trees are relatively fast growing, but long lived (up to 1000 years). They can reach up to 35 m in height, and the trunk may reach 12 m in diameter. Leaves are 16 – 28 cm long, with toothed margins. Bark is grey-brown and deeply ridged. Flowers are long catkins, either male or female, both being borne on the same tree.  Pollination is primarily by wind, and cross pollination is desirable for production. By autumn the female flowers develop into spiny protective husks called cupules. This prickly outer layer deters squirrels and other seed predators from getting to the nuts within them, before they are shed.

Late spring and early autumn frosts can adversely affect flowering, and a mild climate is therefore preferred. In forest conditions, chestnut trees are tolerant of shade and will still produce well as long as there is sufficient moisture. Chestnuts require well-drained soil, and prefer nutritionally poor, neutral to acidic soils; they are intolerant of lime. The ideal annual rainfall is 600 – 800 mm, but they are sensitive to summer drought.

The wood of the chestnut tree is durable and has been used to make furniture, barrels, fencing and roof beams. However, as it tends to split and warp, it is not usually used in large pieces requiring structural strength. Heartwood is a light to medium brown, darkening to a reddish brown with age. Narrow sapwood is well-defined and is pale white to light brown. 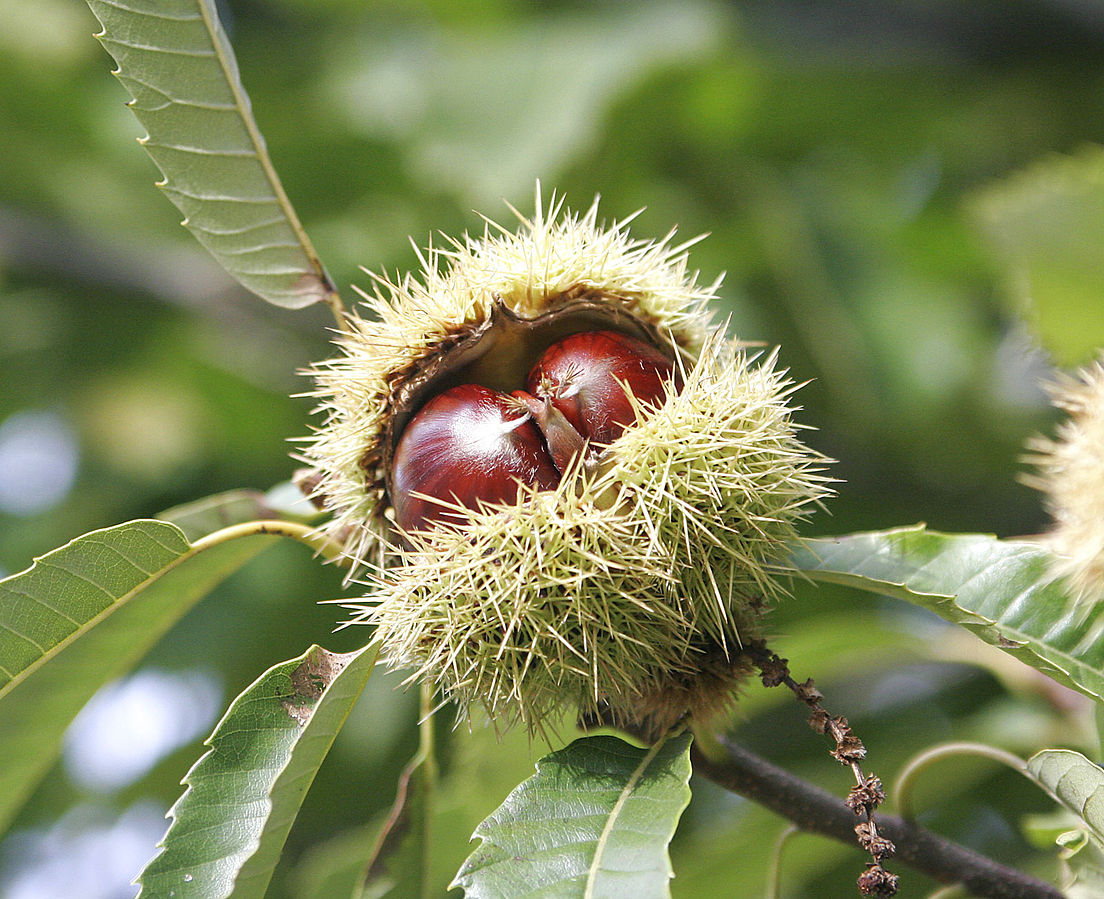 Like acorns, chestnuts should not be eaten raw due to their tannin content. Fresh chestnuts are cooked, either by boiling or roasting them, to denature the tannins and bring out their rich, sweet flavour. For both cooking methods, first make a small incision in the skin or the nuts will explode and spread chestnut shrapnel far and wide. Once cooked, peel off the tough shell and the papery thin skin underneath. Peel the nuts while they’re hot to ensure the complete removal of the inner skin or pellicle, which is bitter.

Chestnuts can also be dried with the shell on, if they are located somewhere with good airflow and low humidity. Once dried, they can be shelled like soft-shell almonds – try putting the nuts in a cloth bag or sack and hitting it on the ground a few times to break the shells. Shake the bag gently to roughly separate the nut meats from the shell pieces, then hand sort to separate the nuts and the shell fragments. Steaming the nuts for a few minutes rehydrates them, and allows the pellicle to be easily rubbed off. After removing the pellicle, boil the nuts to soften them up, and then serve them as-is (perhaps with stewed fruit or vanilla custard) or chop or puree them to use in a chestnut recipe.

Based on the recipe from BBC Good Food, by Mary Cadogan: http://www.bbcgoodfood.com/recipes/8020/chestnut-truffle-cake

To serve, turn the truffle cake out onto a plate, and dust with icing sugar. Serve in thin slices with cream or cold vanilla custard.