Plants are listed alphabetically by their layer in the forest garden. 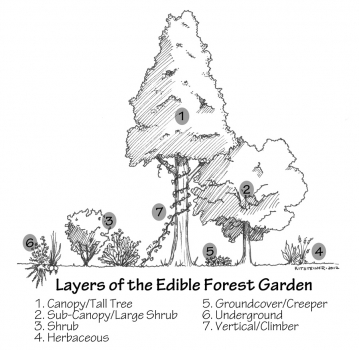 The top layer of the forest garden, these trees are usually 9m or more in height. In smaller forest gardens, this layer can be shorter. The canopy typically includes timber trees and large, light-loving fruit, nut, and nitrogen fixing tree species.

The subcanopy is made up of smaller trees, typically 3 – 9m tall, which prefer a semi-shaded or protected environment. In temperate climate forest gardens and orchards these species can be used to make up the acting canopy layer, but in the harsher mediterranean / semi-arid environment of Western Australia they may need the shade of a true canopy layer or shade structures in the summer. The majority of fruit trees fall into this layer.

Shrubs are woody plants up to about 3m tall, although it can also include large, fleshy plants (e.g. some cacti). This layer includes fruiting shrubs, nut-bearing, medicinal and flowering (insectary) woody plants, as well as many other beneficial plants.

Herbaceous plants do not produce woody stems the way the shrub layer plants do, and often die back in winter. Most culinary and medicinal herbs are in this layer, as are many annual flowers and vegetables.

There is some overlap between the herbaceous layer and the groundcover layers; however groundcovers grow much closer to the gorund, quickly spread to cover bare patches of soil, and can often tolerate some foot traffic.  Many groundcover plants are also somewhat shade tolerant.

Root crops, bulbs, corms and tubers make up this layer. This layer can also include the mycelia of many fungi.

Vines and climbing plants use vertical space, spanning multiple layers of the forest garden. This layer also includes epiphytes (plants which grow on other plants, e.g. many ferns, orchids, and mosses) and arboreal fungi. These plants are a great way to add more productivity to a small space, but can easily get our of hand.

Credit where credit is due – the  idea for this page is stolen directly from John Kitsteiner’s Temperate Climate Permaculture site. The image at the top is similarly stolen, and all credit for it goes to John Kitsteiner 🙂