Back when we first bought the property, and we were starting to think about what we’d like to do in terms of building a house and putting in some productive systems, I did a sector analysis. This is one tool or technique used by permaculture practitioners in the early stages of creating a design, and it looks at the external factors that are going to influence a place. Things like winds, rain and storms, fire risk, noise, migratory pathways for birds or animals, flood risk, and summer and winter sun. 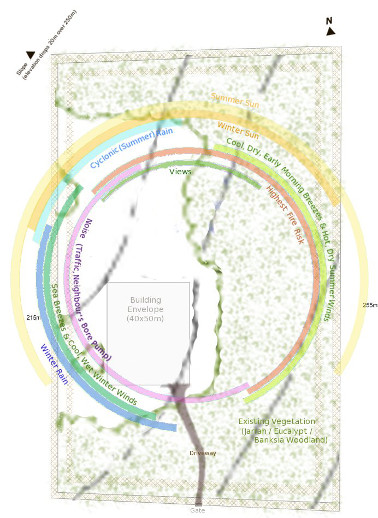 It was brought to mind because someone posted on facebook about a design they’re starting, and it doesn’t sound like they have a full sector analysis yet (they’re unsure about rainfall direction and prevailing winds). I assumed that everyone would start by doing a sector analysis, but maybe not all teachers emphasise how useful they can be. I have to say, my analysis has been very useful in planning what to set up and where to put it.

It’s a living thing, obviously – we update it as we learn more about the place we’re calling home. And other factors influence what can work and what can’t too; soil depth and quality, the slope of the land, existing tree cover and shade, wildlife, groundwater, lots of things. But planning for prevailing winds and rainstorms, and for the summer and winter solar path are – to my way of thinking – essential. And in WA, planning for your fire risk is also essential.

So I guess what I’m saying is, no matter how large or small your garden, a sector analysis is a really useful thing to do as a first step in designing your system.

The climate is something that a lot of people don’t really think about much, unless they happen to be involved in climate change activism or have friends or family who are. For my family, I am that person – although my family are generally better than average in terms of awareness of climate change and the science behind it.

Weeks like this – 41 degrees Celcius yesterday, and predictions of 42 – 45 degrees every day this week – make me painfully aware of these issues. The heat is unpleasant for me, but I spend my days in my air-conditioned office, at my day job. Even the cats spend their day inside the house, and while we don’t have aircon at home, we do have good insulation and passive temperature control designed in, so it stays reasonably cool inside until late afternoon most days. But I feel for the chickens and the guinea fowl; the best I can do for them on days when I’m at work is make sure they have full water containers and some shade for the day, and leave ice in or near their water.

Imagine if you had to sit outside for 8 hours, with nothing more than tepid water and a bit of shade as your defence against the heat.

My birds are pretty tough; I keep Transylvanian Naked Necks deliberately because they handle hot weather better than most breeds (the featherless necks give them more skin to lose heat through), and guinea fowl are naturally heat adapted. I’m a bit worried about the chicks, but there’s nothing I can do that I haven’t done. I’ll pick up a bag of ice on the way home, and any birds which are looking too heat-exhausted will get their feet bathed in ice water to cool their core body temperatures. (As an aside, this is a very effective treatment for over-heated birds – I’ve done it before, and the bird in question recovered completely and was eating again that evening).

To be honest, weeks like last week also make me think about the climate. Rainstorms and maximum temperatures below 30 degrees C aren’t “normal” for Perth in January. But weird weather is the new normal, and we all just have to adapt.

I’m hoping that planting a perennial food forest will give us a bit more stability in terms of food production than the standard annual cropping that most farmers in WA practice. Of course, the trouble with perennial production is that it takes time to get established; we won’t be producing the abundance of fruit, nuts and oils that I imagine for a good 5 to 10 years. So we’ll need to work out some short term production strategies as a compromise with reality.

The downside of summer – other than the endless hot, dry weather, which is not as much fun as you might imagine, and the constant dual risk of sunburn and heatstroke – is fire season. So many things can start a bushfire: a cigarette tossed out a car window by a clueless tourist, an unmanaged BBQ, a freak lightning storm (sadly not accompanied by a summer rain), a spark from an angle-grinder, a gum tree overheating in the 40+ degree (celcius) weather and spontaneously combusting due to the oils it exudes into the air, …

It doesn’t matter, at the end of the day, how they start though. What matters is the broadcast text message from the Department of Fire & Emergency Services saying ‘bushfires in your area, prepare to evactuate or actively defend’. The nervous wait while you hope that its a small fire, that its easily contained, that the wind dies down. The neighbour who tells you that this happens every year, and three years ago it got close enough that they could see the flames on the ridge. What matters is making the decision to leave the house, just in case, because there are fires north, south, and west of you and the wind is picking up and blowing east. Driving through the road blocks as they’re being set up to prevent people going where you just came from.

WA hasn’t had any fire tornadoes (yet) but just plain old fires are still scary. Five people have died already this summer in the fires in Esperance, on the south coast. At the moment we have the relatively easy evacuation option of packing the cats into the car and driving to my parents house, but the more animals we get the harder that decision will be. How hard must it be for people with horses, or cattle, if I felt bad about leaving our week old guinea fowl keets and our chickens?

In spite of the risks, the fires have (so far) not actually approached our house. The roads were closed but as of this morning there have been no fatalities from this fire, and only one house and two sheds have been lost. And having had a big burn this earlky int he season, we’re much less likely to see another big, dangerous fire in this area this summer, because evrything flammable has already burned off.

Makes you think, though. Without the fire fighters, and the air support planes and helicopters watching the spread & direction of the fire front and dumping water on it, fires like that would just blaze through an entire district. leaving ash and scorchmarks behind them. Moral of the story: this is not the place to wait out the zombie apocalypse if civilisation (and its associated benefits, like fire fighters and roads and early warning systems) fail.