I haven’t been to many rural shows. My first, really, was the Perth Royal Show last year – although I’ve been to the Royal Show before, it’s been for the carnival and the rides rather than the animals. Last year I figured, we’re starting a farm, I’ll look at the livestock. Actually, I only intended to look at the chickens and pigeons, and the cats. I ended up also checking out the alpacas, goats, and cattle. 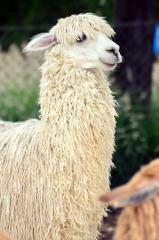 I went to my second show on Saturday, and my third on Sunday. Saturday was the 2013 Colourbration alpaca show, which I wanted to attend because I’m thinking semi-seriously about keeping a few alpacas for their wool and meat, and not all the breeders in WA have an online presence. I chatted to a lovely lad from Taylors Alpacas, who let me pet two of her animals. Touching the suri alpacas is like stroking a piece of warm, living silk. It really is, no exaggeration. The huacayas are soft and fluffy, but the suris feel like water.

I didn’t realise that the alpacas don’t suffer from the heat in Perth in the summer, even if they haven’t been shorn. I assumed they were shorn in spring like sheep partially to keep them form overheating in summer, but apparently not. Their wool insulates them, and they’ll happily lie out in the sun on 40 degree days. The suris are often only shorn every second year, as their fleece doesn’t grow enough in a single year to make it worth shearing them. I also didn’t know that alpacas put their ears down and back when they’re nervous, and raise their tails up when they’re friendly and happy.

Although it was freezing cold, I really enjoyed the show. It was well laid out, and all the stalls were labeled with the name of the stud that owned the animals. There was even a stand selling alpaca burgers, although none were ready before I left, and alpaca leather products. A few breeders are trying to start up an alpaca meat industry in Australia, because keeping livestock just for the wool doesn’t make financial sense. I’ve eaten alpaca before, in South America, and it’s pretty tasty. Lean, mild flavoured red meat, a bit like veal or rabbit. I did get the name of the abattoir they use, which is open to taking single animals (this is a rarity in WA, and worth noting down for later). 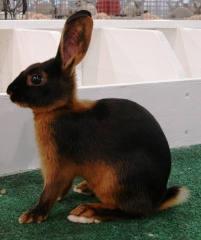 Sunday was a different story, though. On Sunday I went to the WA Rabbit Association’s show, in the hopes of seeing in person some of the breeds I’m interested in. I’m planning a cross-breeding experiment to produce largish meat rabbits with both the satin (shiny, deeply coloured) and rex (very short, plush, velvety textured) fur types. My foundation breeds will be the Standard Rex and the Satin, obviously, but also either a British Giant or Flemish Giant, and possibly a Tan, for the colour (I think the tan markings are beautiful, and if you’re going to raise livestock you should always go with something you like the look of if you can) and also to inject a slightly different body shape. I’m aiming for a good meat rabbit conformation, but with more of an arch than many of the modern meat breeds. Also, a wider variety of genetics means healthier kits.

The show was tiny, or it seemed tiny. There were probably almost as many rabbits as there were alpacas at the Colourbration show, but because they’re smaller, and the cages were stacked, it seemed much smaller. None of the cages were labeled, with the variety or the stud name, so identifying the breeders was tough. It was crowded, because the room was too small for the number of people and animals, and it didn’t seem like they were expecting many people to turn up aside form the breeders and possibly their families.

Don’t get me wrong, everyone was friendly and lovely, but it was pretty tough to find any information. Clearly, rabbits are not a big enough thing in WA to have the type of organisation that alpacas demand.

I’ve spent the last few weeks researching rabbits. I have my reasons. 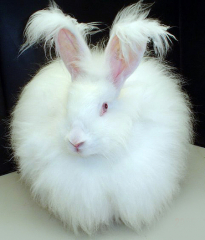 First reason is that K indicated an interest in spinning, and I thought I’d look into how viable it would be to have a little cottage industry setup selling yarn, and possibly raw fleece. (Answer: limited to zero for making any actual money/profit) 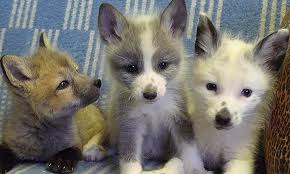 At the same time, I’ve been reading and thinking about the Russian domestication experiment with silver foxes. Short version: the researchers took mostly-wild foxes from a fur farm and bred them for domestication, using a lowered fear response to humans as demonstrated by least avoidance behaviours and lowered agression as the main selection criterion. Within 8 generations they had adult foxes which wagged their tails like dogs, whined and fawned for attention from their keepers, and showed a diverse range of colouring and coat patterns. After 50-some years of the breeding program, the domesticated foxes are adorable, completely domesticated housepets. 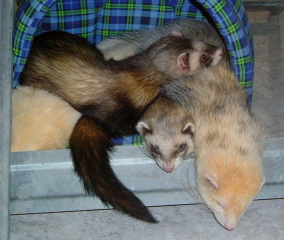 I’m absolutely fascinated with genetics, and I really want to replicate the experiment. But not with foxes. Keeping foxes is illegal in Australia (even assuming we could live-trap enough for a starting gene pool), and there are hefty fines for doing it. I considered ferrets, but they’re tricky to breed (female ferrets which go into season and aren’t bred will often die!) and there probably isn’t much call for super-domesticated ferrets. Ferret fanciers don’t mind the slightly bitey nature of ferrets, and non-ferret-fanciers won’t have a ferret anyway. Rats are an option, but again – what do you do with your super-domesticated rats? Rat fanciers will keep rats anyway, and other people will still dislike them. Rabbits, though – rabbits are a possibility.

Rabbits are only semi-domesticated, in that they still display fear responses and avoidance behaviours towards humans (unlike labrador dogs, for example, or even domestic cats), so there’s the potential for the experiment to show obvious results. They reproduce fast, which is desirable to get results in a resaonable timeframe. They’re easy to get, legal to keep, and thay’re also useful. Angora rabbits are a possible wool animal, and I was considering keeping rabbits as meat animals anyway.

However, before getting too heavily invested in the idea of keeping rabbits for meat, I thought it might be wise to try it. I’d never (knowingly) eaten rabbit. So I made rabbit stew the other day. I got a farmed rabbit form the butcher, and followed instruction on youtube to debone it (I was fine with the tiny little carcass, but K had to leave the room, and my mother made slightly horrified noises about eating Flopsy, Mopsy, or Cottontail when I told her about it). One slow cooker later, rabbit stew.

Nom nom nom. Turns out that I like rabbit. Especially with a bit of red wine, tomatoes & garlic. 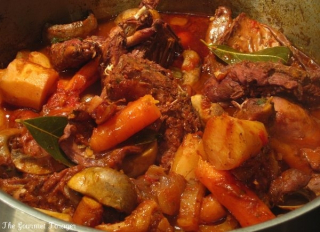 As an aside, I have no idea how fibre farmers make enough money to keep going. Not only is it a negative sum, financially, to keep Angora rabbits, this is also the case for angora goats, cashmere goats, and alpacas.

The goats become (just) financially viable if you include the savings from milking them (and using that milk instead of buying milk) and eating the unwanted baby goats produced to keep the does in milk (instead of buying meat). Alpacas, similarly, become (just) viable if you breed them once a year and include the savings from eating the young alpacas instead of buying meat. Rabbits are only viable to keep for wool if you can reduce the time spent checking their health, handling them, and making sure they have food & water down to 1 minute per rabbit per day or less. How do farmers survive???